Stakeholder analysis identifies those who have influence in a system. It provides
a framework to help understand the needs that they have and how to respond to
those needs.

Stakeholder analysis categorises people according to the amount of agreement
they have for change and the amount of trust they have in the organisation to
make it happen. 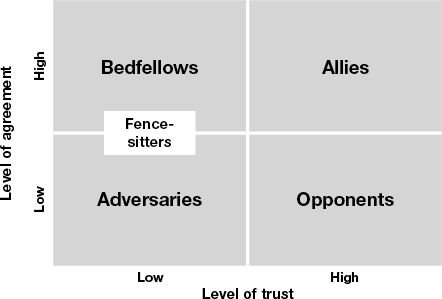 They agree with the idea but don’t trust in the organisations way of doing things, but
they can be persuaded to see things differently. They tend to hear and say the things
that suit their own needs. They’re not entirely trustworthy. One minute they seem to be
supporting the idea and the next criticising it. While they can be generally kept on side,
they’re also keen backstabbers.

These stakeholders don’t like what has been said and don’t have trust in the
organisation. They’ll typically resist all attempts at negotiation. Their oppositional
behaviour needs keeping to a minimum. So ask; what can be done to placate them?

These stakeholders are on side. They trust in the organisation and like where things are
headed. They are good friends and because of that a useful resource and good
collaborators to make plans with. They have influence over other stakeholders. Their
support needs maintaining but needs little input. It’s a mutually good relationship.

Fence sitters: low trust and really can’t decide if they like the plans or not.

Neither friend nor adversary they are worth negotiating with by asking; ‘exactly what is
it that’s stopping you’? But at the end of the day they usually make their own minds up.

This useful resource from the Office of Public Management helps to explain the
behaviours associated with each political skill, you can read it here.