The Cultural Web is a tool used to map the culture of an organisation and is a
way of seeing and understating the different influences that affect organisational
culture. It can be used to map existing culture and it can also used to map future
culture based on the question: ‘What does the culture need to look like to make
this change happen’? The two maps can then be compared in order to promote
discussion and highlight what, where and how change can be implemented.

Surfacing: how and why things are done.

Stories: How an organisation understands and explains itself.
Rituals and Routines: The accepted norms and practices.
Symbols: Physical artefacts. The unofficial and official representations of culture.
Organisational Structures: Formal structures and hierarchy, as well as the
informal routes of power and influence.
Power Structures: The people and the systems who have the power to get things done.
Control Systems: How an organisation controls how things are done. 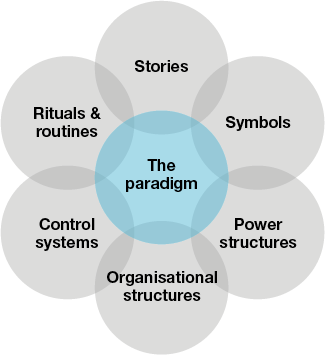